At the close of 2020 Afire Bey V is the sire of 480 National winners, 45 of them added after his passing even though his book was for all intents closed at his death. He has sired 258 individual horses that have won either a National Championship or a Reserve National Championship (or both). His National winners have won to date 932 National Championships or Reserves and 3,081 Top 10 awards. He is the sire of over 750 Champions or Reserve Champions or Regional winners. For over a hundred years, no Arabian stallion standing at public stud to mares numbering 500 or more has a better percentage of champions to number of get. Afire Bey V’s is 56%. His percentage of offspring that have won their awards in English competition is 85%, with the balance of winning percentages split almost evenly between Halter (7%) and all other performance classes (8%). 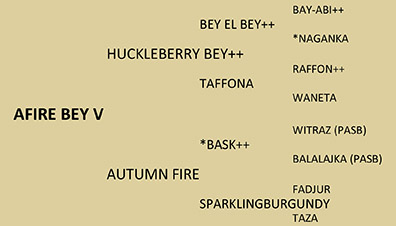